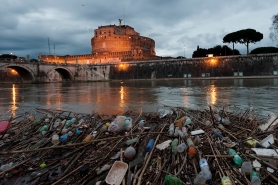 Near Ponte Sant’Angelo. Vast amounts of rubbish are thrown into the river every days. 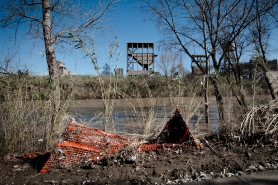 Near Ponte Marconi. The ruins of an old abandoned factory.

Near Ponte Milvio. The steps from the cycle lane to the river bank, in a state of abandonment since November 2012.

Near Ponte Marconi. Rome has the biggest gypsy community. Many live in illegal camps. This nomads have built large “villages” by the Tiber, expecially near Ponte Marconi, creating enormous rubbish tips.

Near Ponte Marconi. Outside the city center, the cycle lane continues to the Marconi area. Here you garbage, building rubbish and also human beings.

Near Ponte Marconi. Rome has 9 centers for collecting garbage. Despite this the river banks are often used as an open tip. 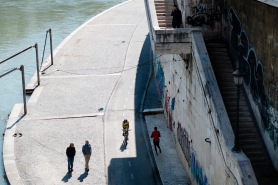 Ponte Fabricio. Along the banks of the river the boys are fishing. 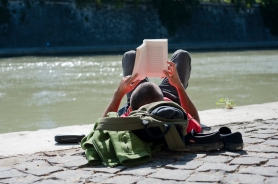 Near Ponte Regina Margherita. Along the bank a man is reading a book. 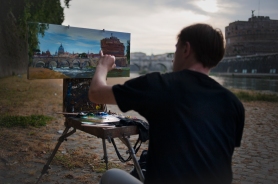 Near Ponte Sant’Angelo. Anton Khubakov, a russian painter, is painting a canvas along the bank of the river.

Ponte Regina Margherita. A writer paints his murals on the the river bank wall 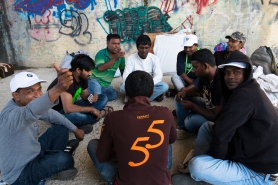 Ponte Principe Amedeo. Illegal street vendors hide from the Police under the bridge.

Medatone Molteni. Metadone is a synthetic opioid used in medicine as an analgesic, in the treatment of heroin addiction.

Minias. Belongs to a group of medicines that conteins benzodiazepine. Like all anti-anxiety a hypnotic medicines it is often taken by drug-addicts.

Paroxetina. Paroxetina is an antidepressant drug. It is commonly used to treat depression, in panic attacks, in obsessive – compulsive disorder, in cases of social phobia and anxiety disorders.

Rivotril. Rivotril capsules contein benzodiazepine. It is a sedative on the central nervous system. It calms anxiety and can produce sleepiness. It can also produce a hypnotic effect. Hight doses can cause coma and even death.

Near Ponte Regina Margherita. A drug addict shooting up with eroine on the stairs leading to the river bank.

Ponte Duca d’Aosta. The are 35 bridges over the Tiber. Many homeless take shelter here, creating small on big camps.

Ponte Mazzini. Jacob is Polish and is 30 old. he used to work in a restaurant in the center, but it closed, becouse of the crisis and he found himself on the street. He has lived under a bridge for about 6 months.

Ponte Mazzini. Jacob’s kitchen. The 30 year old Pole has been living under the bridge for about 6 months.

Ponte Mazzini. Jacob’s kitchen. The 30 year old Pole has been living under the bridge for about 6 months.

Near Ponte dell’Industria. Laura is 66. Since the death of her mother in 2006, she has been living on the streets under God’s protection, who she calls Dad. In December 2013 she built a more comfortable shelter near the river bank. 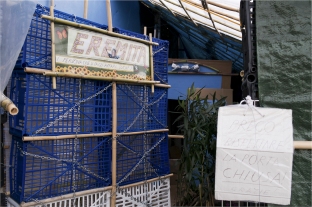 Near Ponte dell’Industria. The entrance to “Laura’s home” on the bank of the Tiber.

Near Ponte dell’Industria. The room that Laura built in her shelter. She made the sweet above the door in memory of her mother who always carried sweets in her handbag.

“i feel blessed like a child in its mother’s arms”. Some pages from Laura’s screpbook.

Ponte Vittorio Emanuele. Graffiti on the walls of the river bank. Against the flow like this river.

Rome owes its development and growth to the Tiber. The river was important in connecting the city to the sea, but over the centuries continual flooding created health and transport problems, which were only resolved at the end of the 19th century by the construction of long walls along the river. However, this isolated the river from the city. Today this can be seen by the state of neglect of the river banks, even though they are designated as cycle lanes. Or by the garbage which has turned the river banks into an open waste tip. Or by the empty medicine packets left by drug addicts. However, all of this a sign of live. Along the Tiber’s banks there are different types of lives. Here, even in the center of the capital, there exists an ecosystem that doesn’t suffer from chaos, traffic, noise, shopping malls or the crowds of tourists. it is a hiding place. You are alone with the river and its inhabitants who share their world with whoever comes down to take a break from the stressful life above. Here you can meet artist, fishermen, cyclists, passers-by and the drop-outs who have made the Tiber their home.